How to use a Personal Attack Alarm

Are personal attack alarms any good? 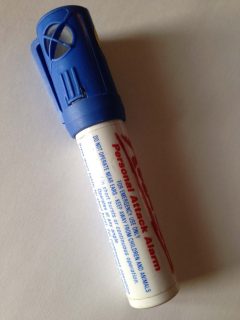 How do you use a personal attack alarm correctly?

When attendees are asked to describe how a personal attack alarm should be used, it’s strange … generally people don’t really know!

‘You keep it in your hand and they run away!‘

The correct way to use a personal attack alarm is to activate the gas canister by depressing the top firmly, causing the alarm to emit a very loud shrill sound. Once activated, throw the alarm down to the ground, about just in front or slightly behind the attacker. An attacker’s natural reaction is, I would suggest, to stamp on the alarm to stop the shrill noise sounding. This provides the opportunity to escape!

With many years experience delivering personal safety training to many thousands of delegates, some years ago Safety Solutions had the pleasure of delivering training for support workers on behalf of Safer Wales, a charitable organisation located in Cardiff. In addition to a variety of projects, Safer Wales support vulnerable women who engage in prostitution in Cardiff City Centre. In addition to a variety of support opportunities, the women were given personal attack alarms.

Safer Wales staff shared examples where the women had occasionally ask for replacement alarms. When asked if the alarms had been used during a dangerous situations, women stated they had used the alarm during an attack. Interestingly, the women  had followed the above procedure, with many accounts suggesting that the attackers were distracted by the sound, leading them to release the woman in an attempt to destroy the alarm. Distractions of this nature provided the women with vital seconds to escape!

Safety Solutions have tested a variety of the popular ‘key ring’ style battery operated personal attack alarms. When activated and thrown down to the pavement or a road surface, we found that the small battery within the alarm often dislodged on impact, causing the alarm to fail. We believe this is a major design fault present in many of the battery operated alarms available on the market. A question must also be asked, why you would throw the alarm in an attempt to escape to the ground if it’s attached to your house keys!